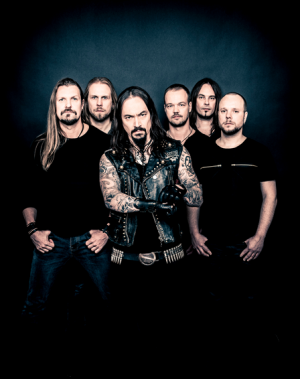 Even getting into the studio and getting the songs down is not that clear cut as the band found out working with famed producer Jens Bogren. “Every time you work with a new producer it’s a new territory. We didn’t know Jens beforehand but knew he is very strict. When we did the pre-production we began to get the idea of how long he wanted us to record. He said to me that he needed me there for three weeks and I was like ‘you must be joking’ as when I normally record my guitars it takes four days maximum. We started about 8 o’clock every morning and worked until 6 o’clock in the evening. It takes a lot of nerves to tolerate that method but he’s very educated and at the end of the day we are 40-year-old guys who think we know how to record but you still learn something new about yourself when the producer has you playing for ten hours a day.”

The end results are certainly worth it though and one listen to ‘Under The Red Cloud’s stormy opening title track will clearly illustrate that Amorphis have once again delivered a timeless, golden musical experience. The band do not work normally when it comes to the lyrical themes either, utilising poet Pekka Kainulainen to write them instead. His knowledge of The Kalavela, an epic work of 19th Century folkloric Finnish poetry, is a common thread intertwined through the narrative of all the band’s work. We can envisage the group eagerly sitting around a campfire waiting the next ‘tales’ to be delivered to them, but isn’t it an odd way of working? “The fact is none of us could do this like Pekka,” admits Esa. “We have high standards when it comes to the music and the visual side of the band, for us the lyrics are just as important, so for us it is important that we have an outsider write them, with a meaning that makes sense to us rather than singing about a rock and roll life or impaling Christians or whatever.” Well that clears up that red cloud but what about the one looming dangerously over the new album, how would Esa interpret Pekka’s latest prose? Is it some sort of warning? “Yes that’s the basic idea, something bad, something ecological will happen if we keep living the way we are. The lyrics deal with the soul-searching hope from nature and the old spirits and how he sees the world situation at the moment in line with the old beliefs.

There’s a wealth of styles within these epic songs taking things from a melodic death metal backbone to Finnish folk-prog and even Oriental scales with Esa playing a sitar. Chrigel Glanzmann (Eluveitie) adding flute and Martin Lopez’s percussion really temper the songs. How exactly would Esa explain the band’s sound and influences? “At the very early stages of the band we got fed up with the idea of just playing death metal, we like adding some different surprises and trying different things. With ‘Tales…’ it was totally out of the blue, we started to add Finnish folk melody lines but we just loved the idea. There were lots of bands in Finland during the ’70s who combined traditional folk melodies into their music, a little bit like Jethro Tull and we thought why couldn’t we do that as well? In a way it worked and a slight folk touch has always been part of our band.”

The band recently announced a UK tour for 2016

Tickets are on-sale from today at the following links: