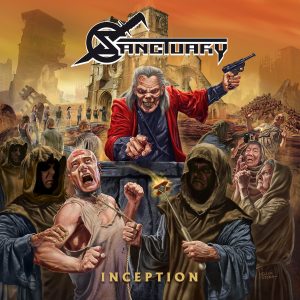 ‘Refuge Denied’ is the classic debut album of the Seattle-based US power (could we call them thrashers?) mob, Sanctuary. It was produced by Dave Mustaine and released in 1988. One more album followed two years later (‘Into The Mirror Black’) and after a while, Sanctuary fell into oblivion for nearly two decades, until the reunion and a new album in 2014. During the years of oblivion, Nevermore (featuring ex-Sanctuary members) ruled the metal world during 1995 to 2010 and that was a shame in a way as ‘Refuge Denied’ is a great album, nearly a masterpiece.

So, what is ‘Inception’? The 1986 demo songs were given to Dave by Lenny Rutledge (guitar) after a Megadeth and King Diamond concert, and later that night, between some drinks and discussions about riffs, he decided to produce Sanctuary’s first album. Seven of these tracks made it to ‘Refuge Denied’ but there are also two other songs, never released before; ‘Dream Of The Incubus’ and ‘I Am Insane’. These songs are dominated by youthful power, passion, thrashy guitars and high-pitched vocals, courtesy of the blonde screamer, Warrel Dane. These early demo songs are now mastered, repaired and restored by famed producer Zeuss (Queensryche, Rob Zombie, Hatebreed) and no matter what you believe about such releases, if you are a fan of Sanctuary, you will probably love hearing these. Do not expect a better production than ‘Refuge Denied’, but there is a certain energy in the early versions of tracks like ‘Die For My Sins’ and ‘Battle Angels’ that is unbeatable. Raw and powerful, this is the first statement of a band that could have become really huge if they wouldn’t be lost in the grunge revolution of their city during the early ’90s.