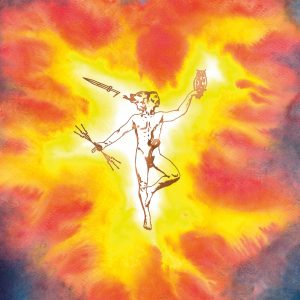 Having been teasing the kvlt underground with a couple of highly regarded EPs and much lauded live shows, Swiss duo Bölzer finally get round to dropping their debut album and surprise everyone in the process. Rather than anticipated layers of dirty crust, it’s the cleanliness of delivery that has caught many unawares courtesy of KzR’s beguiling and rapturous vocal performance, full of richly expressive wanderlust. Reminiscent a little of the clean tones in bands like Akercocke it comes as a big surprise at first, but once unveiling itself with the twisting rhythmic thrust of the instrumentation it all makes perfect sense.

Melodies throughout are triumphant and gallop away with an unhinged zeal which can only be described as truly “heroic”. Much like the last, mature opus from Destroyer 666 this makes for a completely addictive album full of underlying mysteries and atmosphere. The occasional death belch potently rears out amidst mid-era Killing Joke etched arcane musical motifs, glistening strident guitar crescendos leap toward the heavens and by the time the stop-start freneticism of ‘Chlorophyllia’ hits the hunger to press play all over again is palpable. ‘Spiritual Athleticism’ as a title is not as preposterous as first glance suggested and ‘Hero’ has indeed proven an album of Olympic stature.