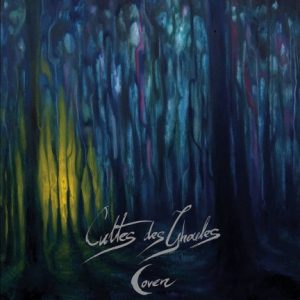 ‘Coven, Or Evil Ways Instead Of Love’ is the insane new album from Cultes Des Ghoules, one of Poland’s finest black metal exports. Although considering black metal has pretty flexible norms, this album exceeds them all (and some would say common sense itself) with its extravagant stylings and epic 96 minute running-time.

Encouraged by success of their previous lengthy releases, and sustained by a narrative-theme that needs time to develop, the band boldly embrace the risk implied by such a long run-time, leaving no space for mixed feelings towards this ambitious work.

‘Coven…’ was inspired by the album ‘The Jilemnice Occultist’ by the legendary Czech band Master’s Hammer, an innovative concept album from 1993 that tells the story of a young occultist, and was described by the band as ‘the first black metal operetta’. With ‘Coven…’, Cultes Des Ghoules follow in these footsteps, with a story of a woman who chooses the world of occult and witchcraft over love.

The blackened metal-opera is split into five scenes: ‘The Prophecy Prologue)/Devell, The Devell He Is, I Swear God…’ is the most diverse and masterful part of the album; ‘Mischief, Mischief, The Devilry Is At Toil…’ is a shorter, fast-moving sequence at 11:32 minutes, which leaves little room for boredom. ‘Strange Day, See The Clash Of Heart And Reason…’ seems harder to digest somehow, whilst Act 4 ‘Storm Is Coming, Come The Blessed Madness…’ has some pretty straightforward riffs, but is bleak and absorbing enough. And finally, if you make it so far you might as well enjoy the end of this operetta, a 28-minute test of endurance called: ‘Satan, Father, Savior, Hear My Prayer… (Scene V)’.

One of the unique merits of this album is the vocals; Mark of the Devil does an outstanding job, modifying his voice to enact each of the characters of the play himself. Beside vocals, all the instruments are doing their part majestically: outstanding beefy bass lines are accompanied by slow and devilish guitar riffs and primitive drum rhythms, all mixed with some synth passages to enhance the gloomy, doom atmosphere. The production finds a perfect balance between grimness and brutality but is clean enough for the listener to enjoy the band’s outstanding mode of black poetry. ‘Coven…’ is not an easy-listening album, it requires attention and a certain state-of-mind, but the experience can be pretty rewarding once you immerse yourself into its world.