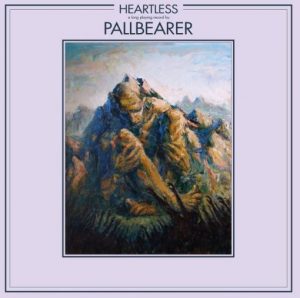 Having set a precedent for emotive doom metal with soaring riffs and heart-rending vocals on their previous two albums, Pallbearer take a completely new direction with third full-length ‘Heartless’. Now signed to Nuclear Blast for Europe, the Little Rock four-piece have reinvented their sound, opting for a more aggressive approach that leans heavily in the direction of down-tuned progressive metal.

Brett Campbell’s vocals sit at a slightly lower register and, while they still capture all of the feeling the band are trying to convey, by taking his voice down an octave or two he amplifies the darker nature of the lyrical subject matter. The moods on this record change from anguish on songs such as ‘Lie Of Survival’ to angry determination on the likes of ‘Cruel Road’. It’s clear to see that Pallbearer have become confident enough with their sound and set-up to experiment and pull it into another direction.

Despite their change in tone and song-writing dynamic, it’s still very much the Pallbearer that people have grown to know and love, so there’ll be no unpleasant surprises or anything completely unrecognisable. The band are on finer form than ever and this is possibly the best they’ve sounded yet.