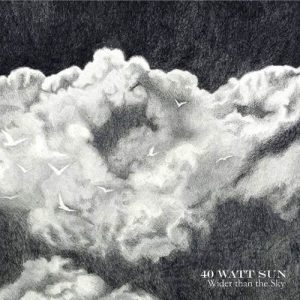 The sophomore album by 40 Watt Sun may be less heavier musically than it’s predecessor, being a much cleaner, refined and more undistorted affair guitar-wise, driven along by subtle percussion and flourishes of bass that slowly sweep the whole album along at a down tempo pace, but there’s a certain density within the sparse musical arrangements and the whole effect is entrancing and these songs hold your attention as they wash over your senses in slow motion. The guitar melodies interweave themselves through the rhythm section and are a fine example of how straight-forward simplicity can be so effective

The vocals of mainman Patrick Walker are as soulful, soaring, powerful and emotive as always and channel the pensive and introspective lyrics perfectly and he delivers another commanding vocal performance that has plenty of goosebump-inducing moments throughout the duration of this follow-up album.

What 40 Watt Sun lack in all-out distortion and bombast is more than made up by the strong searing dynamics at play both vocally and musically and in turn have created a heavy album atmospherically without turning a pedal to the red. Their sound has evolved into one that transcends the boundaries of the doom metal scene and reaches far beyond the confines of that style and this sees the band on the fringes of the scene, in their own musical space, which gives their epic compositions plenty of room to breath to slowly unravel themselves upon the listener.

This may not be crushing in a sonic, heavy doom sense but it is most definitely crushing in an emotional way and is an album full of reflection, grace, atmosphere and cathartic soul-bearing.