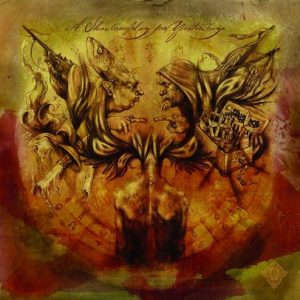 Treading the notoriously fine line between lunacy and genius with all the fearless expertise of a master tightrope walker, A Forest Of Stars have pulled off a genre-defying feat in the spellbinding shape of ‘A Shadowplay For Yesterdays’. Penned around the timeless battle between man’s civilised self and his more primitive, earthly lusts, this experimental smash sees savage cuts of extreme metal straining to be contained within the most exquisite of avant garde compositions.  Crackling through layers of ectoplasmic static like a voice from beyond the grave, the ranting poetics of theatrical opener ‘Directionless Resurrectionist’ set a wondrously demented scene for the epic thrills and blackened chills that follow. But, as ‘Prey Tell Of The Church Fate’s hoarse screams and snares spiral unexpectedly into bittersweet, violin-flecked territory, it fast becomes apparent that there’s ingenious method in this experimental work of madness. Ranking among ‘A Shadowplay’s…’ most imaginative highlights, the mournful piano notes and knife-edged riffage of ‘A Prophet For A Pound Of Flesh’ positively reeks of frostbitten gloom before this once-deathly assault is illuminated in a breathtaking measure of mellow acoustics. Topped off with a Genesis-flavoured flute solo, there’s no small amount of ’70s-tinged prog factored into the mix, with this influence coming to the fore in ‘Gatherer Of The Pure’. Contrasting explosively with the track’s nightmarish intro of pig squeals and sinister, circus-style trappings, it is here that the ghosts of bygone times and the gods of rock converge to groundbreaking effect.  While the pummelling snares AFOS favour may occasionally border on distracting, the band’s talent for uniting seemingly incompatible influences has reached a revolutionary new high in ‘A Shadowplay…’ and no matter how far the band’s colossal musical scope may stretch throughout, each and every sonic thread is deftly crafted into a spectral, seamlessly organic entity of an album.