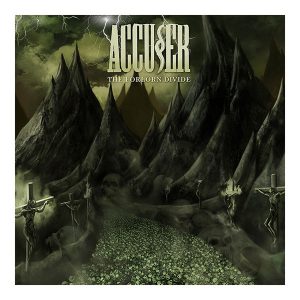 German thrashers Accuser may have been active in one incarnation or another since the mid-’80s but I dare say they have flown under the radar of a lot of metalheads outside of Germany. These are true underdogs of the Teutonic thrash metal scene but that hasn’t stopped them from releasing an impressive arsenal of full-lengths since 1987.

Their general obscurity no doubt has something to do with the majority of their albums being released on fairly underground labels (Atom H, No Bull, Red Shift to name but three) but that is all about to change as they have been picked up by metal behemoth Metal Blade. Accuser will finally reach more ears with this latest album and it will put their name in the consciousness of the metalsphere.

So what does this latest effort (their 11th in total!) offer musically?
Well Accuser deliver very solid and punchy thrash metal. They seem to have gone back to their classic thrash roots after a bit of a groove metal detour in their mid-career, whilst keeping in touch with the current scene.  It’s a very energetic affair throughout and it’s obvious they are competent musicians who can definitely handle their instruments. The lead guitar work is excellent, the riffing is tight, crunchy and crisp, the drumming pounds along relentlessly. The bass is weighty and the vocals are very harsh and gruff, so gruff in fact they almost sound death metal in places.

This is precisely executed thrash metal full of technical prowess and well-honed flair and the very powerful and sharp production is a perfect compliment to the aural aggression. Accuser have delivered an album that is hard-hitting enough to put them amongst the big boys of German thrash and it should finally lift them out of their relative obscurity and give these Deutsch die-hards some long overdue success.