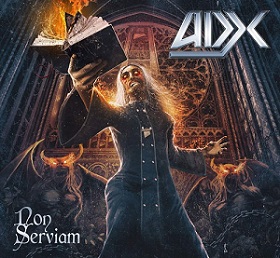 ADX have been around for almost 35 years, and it’s really great to see they have three original members still delivering the goods on ‘Non Serviam’, their ninth album. Oddly enough, this one is not backed up by any label, but do not be concerned, as the album is professional from A to Z with modern and balanced production that respects every instrument, some snazzy (albeit photoshopped) artwork, and most of all, catchy songs.

Their blend of heavy and speed metal respects the old traditions and is anchored in the ’80s, but also is aggressively modern, that modernity found in riffs that would fit on early Hammerfall albums, or even in some solos worthy of a Dragonforce record ten years ago. And so what’s ADX’s secret ingredient, which makes them different from the other players in that genre? It’s their singer Phil Grelaud, who’s sticking to his French mother tongue, as melodic and vindictive as Trust’s Bernie Bonvoisin was all that time ago.

With a strong focus on war (‘La Mort En Face’, ‘B17 Phantom’, ‘Les Oubliés’…), Phil’s intelligible vocals are made for the stage. A solid album that should please the heavy/speed fans, as long as they do not hate the French language, that is!