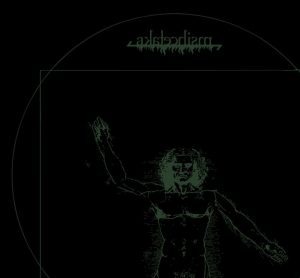 Invictus as a label rightly garners a lot of attention and when the relatively short roster is expanded upon you know that the newcomers should be weighed up. Germany’s Akatechism are no exception. Relatively orthodox in nature, at first listen they appear to have crawled from the same primordial soup as many a death metal band these days, opting for slow and low muddiness but these hymns to decay are arguably belched out with a lot more malice than much of the current scene. ‘Dripping Flames’ isn’t your typical, trendy “sepulchral death metal” demo – it is murky yes but there is an added jarring note in Akatechism’s formula, more akin to Arkhon Infaustus and the early-2000’s French scene than the Incantation-clones filling the shelves these days, setting them apart. The three tracks are claustrophobic as you like with discordant notes left hanging in the dense fog of the chugging, slow as molasses riffs. The occasional blastbeat is used to good effect as barbarity is not what is displayed here just aching death, though they can deliver a punch when needed. Closing track, the fifteen minute epic ‘Omega’ feels like the inevitably of ruin and the futility of man’s endeavours set to hulking riffs that drag you further down. Akatechism come to teach the word of the Abyss and thankfully Invictus have once again thrust into the light a band that possesses that all important bit of something extra.