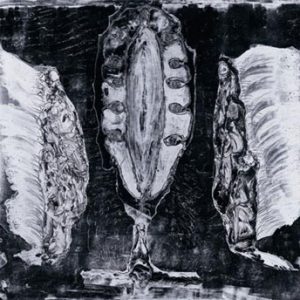 While most split LPs are mutually exclusive for both respective bands and recordings, ‘Initiated In Impiety’ goes much deeper than most. Divided up between two of Canada’s keenest exponents of unpitying, ruthless warfare, both bands already purvey a complimentary stile towards each other, but for this have collaborated to present a record that presents a unified front thematically. Kicking off with side ‘Lucifer’, Antediluvian have an enviable track record when it comes to musical destruction but these three tracks are their most focused, yet conversely also their most chaotic and twisted attacks yet. Creepy, deathly and vicious, the inhuman vocal style tops this most majestical of death-driven rage. Adversarial respond with side ‘Leviathan’ and, even more than their counterparts, is easily their strongest recording thus far. Their three tracks provide for an incredibly resilient listen; there’s a hint of Voivod’s dissonance at play and alongside the swirling technicality on offer shows that Adversarial’s ability of mastering destruction with brutal, hellish death metal is confirmed.