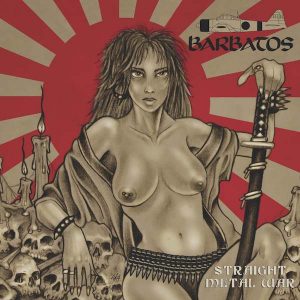 ‘Straight Metal War’ is the fifth full-length album from Barbatos in a career spanning 17 years. Playing a brand of booze-drenched metallic punk, Barbatos stick to the rule book of songs about Satan, Hell, women, drugs, war and basically having a filthy old time. As ‘Hells Witching Metal’ kicks off the poor album production is instantly noticeable. Muffled guitars and at times an overbearing mix of broken English vocals doesn’t really make for a comfortable listening experience. However, when you’ve been doing this for as long as Barbatos have, why change? ‘Heavy Metal Forces’ and ‘Seven Teen’ give the air of a Judas Priest cover band trying to write their own music whilst holding down true heavy metal values. It’s safe to say that if you’re a fan of Barbatos you’ll find this to be a welcome addition to their discography. But, for a new listener you can do much, much better.