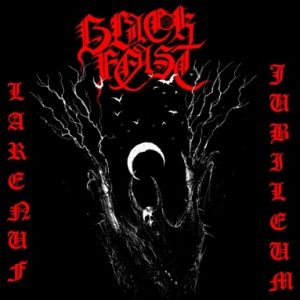 Shat out the frozen bowels of Finland and reeking of all manner of foul odours, many of them with a definite stench of Beherit, this is a collection of rare demo material and previously unreleased tracks from the now-defunct band. As one would expect production quality varies but on the whole suitably abrasive in line with the tumultuous bestial primitivism of the source material. Most notable is the vocal presence from the sinister sounding Nocturnal Soul Of Black Oath, which is upfront and gibbering like a demon with large emphasis on reverb ridden belches and growls. Underlying it is a chaotic stew of barbaric whiplashing guitars and clacking drums. Occasionally a solo slithers out of the primeval swamp but on the whole these ‘mortuary ghouls’ approach things like they are wildly stabbing and slashing away in the dark. Naturally it all makes up an uncompromising and ferocious listening experience, the charm of which is mainly down to the extremity and devotion to darkness of the participants.