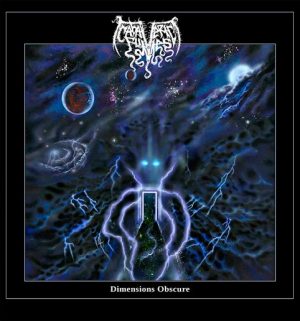 But when will this mob from Brittany release their first full-length? Cadaveric Fumes have been around for a few years (since 2011), and until then we’ll then have to satisfy our need for sound with this EP.

If you were expecting graveyards, zombies, and creepy death metal, ‘Dimensions Obscure’ may surprise you: once the keyboard intro (typically suiting a ’70s horror movie) is over, you’ll end up backed into a heavy metal alleyway with dirty, vomited vocals, backed up by a pretty loose, laid-back, and not-that-brutal assault. This EP sounds very live and natural, sometimes almost improvised, without tons of the traditional death metal effects, contributing in making it sound rather soft compared to Abhomine or Grave Miasma for example.

And the multitude of ’60s and ’70s rock/spacerock touches, or that strange solo on ‘Where Darkness Reigns Pristine’ reinforce the feeling this could be a jam between Hawkwind, Autopsy, and a Swedish dark death band from the mid-’90s. If Scooby-Doo and friends, tripping on evil acid and jamming in a Louisiana graveyard, could record songs, they’d sound like those on ‘Dimensions Obscure’…