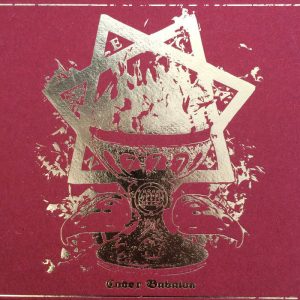 Hailing from Italy, the Fenriz-approved three Bones brothers (Dorian, Henry and Tony) and drummer Mike de Chirico deliver doomed rock ‘n’ metal and since 2011 they have released one EP (‘Ghost Owl’, 2011), two albums (‘Ascension’, 2012 and ‘Church Of Shamanic Goetia’, 2014), and a split release with Doomraiser (2013).

Here we are dealing with a new EP release, consisting of three songs, each one around nine minutes long. Caronte (Italian for Charon) are standing on the side of bands like Electric Wizard with an essence of Saint Vitus and vocals that in some moments bring to mind Danzig and the sorely missed In Solitude.

The lyrical occultism and the themes they deal with work perfectly for this ultra heavy vehicle, but there are also moments of desperation and mourning with a psychedelic touch. Three long tracks, created like they were jamming in a smoked basement after drinking and discussing your wretched failures. Not your everyday spin, but if you are in such a mood, it will drive you deeper into despair.