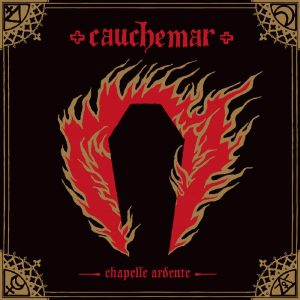 This Canadian quartet clearly have their musical roots firmly in the ’70s/early ’80s metal and proto doom evoking the musical spirit of bands such as Pagan Altar and Witchfinder General. There’s a dark atmosphere and aura of occult mysticism throughout this sophomore effort, ‘Chapelle Ardente’ (which translates into “Burning Chapel” and refers to an old French-Canadian funeral tradition) that is only bolstered by the vocals and lyrics, which are sung in their native French language. Annick’s lush accented vocals are very bewitching and a breath of fresh air, she has developed and honed her own unique style which makes her stand out from other female vocalists within the occult doom scene.

The band keep things interesting musically with a varied mix of tempos, more upbeat hard rockin’ sections and riffs continuously merge into heavier slower dark doom passages. The production is warm and organic and compliments the band’s traditional style and approach to heavy metal perfectly. Each instrument cuts through the mix clearly and the guitars, bass and drums are powerful and punchy.

Cauchemar are very much forging their own musical path and cannot be lazily pigeonholed; their overall sound both musically and vocally transcends the confines of the occult rock/doom trend and separates them from other female-fronted bands currently playing occult influenced heavy music. There is much more depth to what Cauchemar have crafted. ‘Chapelle Ardente’ is dark and doomy yet marvellously majestic in equal measure.