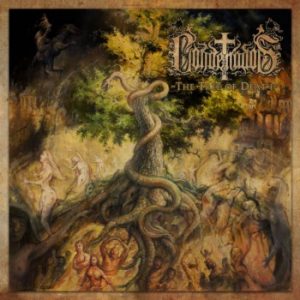 Every facet of Condenados’ sound takes it’s doom-filled cues from the old school and they worship at the altar of bands past, but they add extra mournful morbidity into proceedings, dragging the trad doom sound through a murky windswept graveyard and deep into a dimly-lit crypt.

The vocals of Fernando are excellent, bringing to mind those of fellow Chilean’s Procession, soaring majestically over the music and really lifting the songs up onto a higher and more epic level. Condenados mix the occult dark horror vibe and imagery of Italian bands such as Black Oath, Paul Chain and Abysmal Grief with the epic, traditional heavy doom metal magic of the aforementioned pioneering Swedes Candlemass as well as Solstice, and the end result is creepily captivating and immensely catchy. They also sound like a more morbid Black Sabbath in parts.

The band follow the tradition of the older bands who influenced them and keep the tempos varied and are the antithesis of the modern doom sound where so many bands seem to forsake actual riffs and tempo changes in favour of monotony and lack of variation. This is epic, eerie and evocative.