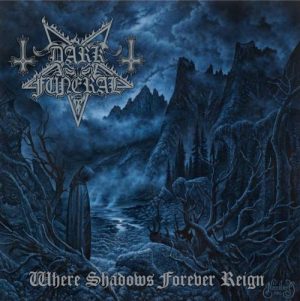 Dark Funeral’s major problem is that their ‘The Secrets Of The Black Arts’ debut from 1996 is such a milestone and their fans are so emotional that anything they record, that’s a bit ‘different’, is subject to some heavy levels of criticism. While the band have been absent from the studio for seven years, their extensive stage presence has created a huge expectation for their new album. The typical mid-’90s Necrolord artwork shows that, despite an highly effective and modern production (note: what a drum sound for such an impeccable drummer!), Dark Funeral are getting back to basics.

The first three tracks here are full-speed and filled with cold riffs and melodies, taking us almost twenty years back in time, albeit closer to ‘Vobiscum Satanas’ (1998) than to ‘Secrets…’! Following these are two slower tracks keeping in with their most recent offerings, but then Lord Ahriman and co get back to pure Satanic violence, doing what they do best.

For their first album after Blackmoon’s passing in 2013, and with their new singer – whose band Grá is worth checking too – Dark Funeral remain in their comfort zone, but with the style and efficiency we’d expect from the veteran black metallers. The wait was worth it, and these soldiers of evil can soon proudly deliver their new tracks on the world stage!