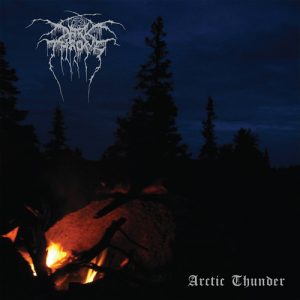 The Darkthrone duo have surprised us again with a very raw and intriguing album, ‘Arctic Thunder’. Self-produced and recorded in the so-called ‘The Bomb Shelter’, the old rehearsal studio used in 1988 for ‘A New Dimension’ and few other demos, a fact that lead most of the audience to think the band are going back to their original sound. But this time, Darkthrone didn’t go back to their beginnings but all the way to the roots of black metal itself, finding inspiration in the sound of the ’80s bands, like Hellhammer, Pagan Altar, Venom or Pentagram. ‘Artic Thunder’ seems like a tribute album to the bands that influenced Fenriz and Nocturno Culto before even starting Darkthrone. Even the name ‘Arctic Thunder’, comes from one’s of Fenriz’s favourite ’80s speed metal bands.

With Nocturno Culto as only vocalist and a lot of blackened doom influence, ‘Arctic Thunder’ is a step back from their tendency towards crust punk and speed metal. Although far from going back to the original sound of the band, this album is one of the most tenebrous from the recent Darkthrone releases.

Showcasing the band’s authority, all elements on this album are remarkably done and perfectly put together. The doom influences are superb, darkened by Nocturno’s voice, while the drums are left in the background, with emphasis on guitar riffs, amplifying the ’80s vibe. The song arrangement is unconventional fitting the mix of doom, black and thrashy riffs while everything is enhanced by the production that keeps it raw and simple yet still polishing the sound to a high quality level.

The eight tracks on this record contain no filler and their unique arrangements have such a variation that it seems more like one whole song going through the whole 39 min of the album. Variety and unity at the same time! Songs evolve from one riff to another, connected by diverse and ingenious guitar passages.

Straightforward and unsettling in the same time, ‘Arctic Thunder’ is like a breath of arctic air for contemporary black metal and band’s discography.