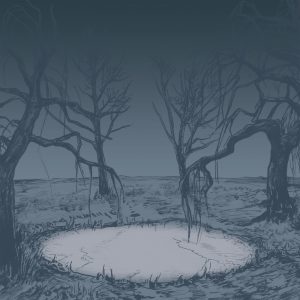 Chris Black is a modern genius. Period.  The mind behind Dawnbringer (and also High Spirits) returned with a five-track EP back in February and ended the lonely path Dawnbringer have marked. The ‘Into The Lair Of The Sun God’ album from 2012 was a instant classic but Dawnbringer had a weird evolution. The moniker “Heavy Metal Is The Law” that is written in the back of their releases distracts you because you probably think that we are dealing with a Manowar or Sacred Steel band type. Not at all. This is heavy metal, but completely different and unique.

Professor Black has a beautiful tinge in his voice and his lyrics are performed in a very emotional way. The opening track ‘Why Would You Leave Me’ starts with a Pink Floyd-ish clean guitar melody that is followed by the mournful voice of Black. Dedicated to death, it moves on with ‘Into The Maze’ and a gloomy aura surrounds you; some excellent guitar solos are therein also. The seven-minute long ‘North By North’ is the epic track of ‘XX’. Twenty years after their first EP, with six full-length albums in between, Dawnbringer still deliver shivers and this final release has a great escalation.

‘Earth’ is next with melancholy and up-tempo rhythm that leads to the closing ‘The End Of The Beginning’ with its memorable guitar lead. It’s a pity that this release passed unnoticed but Dawnbringer have already left their heavy mark among few but devoted friends.