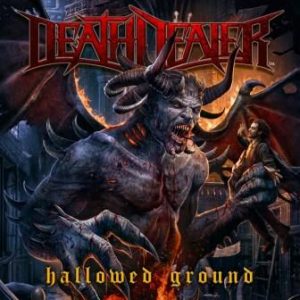 It would be reasonable to expect a line-up of seasoned musicians from fêted bands such as Manowar, Lizzy Borden and Into Eternity to have the creative smarts to condense an opener like ‘Gunslinger’ down to core strengths. But instead, Death Dealer’s second album begins with a faux-dramatic intro completely unrelated to the Judas Priest attack that follows and by the time the acoustic break and Ennio Morricone-ripping solo comes in, you’re fit to gag. This sequence of head-banging in approval and then shaking your head in annoyance continues throughout ‘Hallowed Ground’: for every rousing high-register vocal call from Sean Peck and searing Ross the Ross/Stu Martin riff (backed by the drum thunder of new recruit Steve Bolognese), there’s a cringe-worthy lyric (even for power metal) and/or ill-fitting section that snaps you right out of the zone. Similar issues existed on their 2013 debut, so it’s worrying that amongst strong moments of heavy metal traditionalism, the same mistakes are still being made.