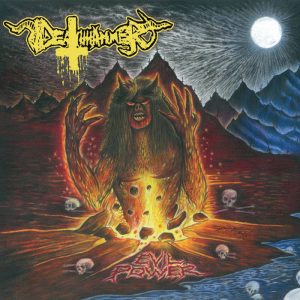 I fell in love with Deathhammer when stumbling across their 2008 EP ‘Forever Ripping Fast’ back in the early haze of a black-thrash education. Championed by heavy metal hero Fenriz was as good a seal of approval as any band of this style needed. Two albums and multiple splits later the Norwegian duo have summoned up from the depths of hell their second Hell’s Headbangers album, ‘Evil Power’. Within seconds of ‘Warriors Of Evil’, the raw thrashing sound is a most welcome one. Deathhammer are a unique band in that their music wouldn’t seem out of place on an ’80s thrash compilation. The hand-drawn artwork and raw, abrasive production gives the impression that these guys really know what they’re doing and are having fun doing so. Tracks like ‘Satan Is Back’ and the galloping evil of ‘Sinner’s Possession’ give the album a welcome change in pace from the shredding blackened thrash. ‘Evil Power’ is the band’s best work to date with an improved take on their signature thrashing metal sound.