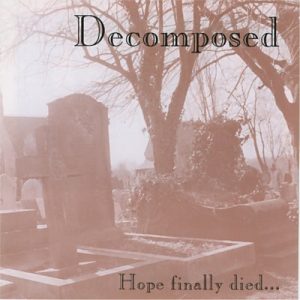 ‘Hope Finally Died’, the sole album by deceased ’90s London based doom/death dealers Decomposed has finally been given a long overdue reissue by Candlelight Records. Originally recorded in 1993 and released in 1994, ‘Hope Finally Died’ is a masterclass in morbidity, from the slow crawling doomed passages of ‘Procession (Of The Undertakers)’ and ‘Inscriptions’ to the more uptempo death metal of ‘At Rest’ and ‘Taste The Dying’. This album is a perfect example of how doom and death metal should be combined effectively and Decomposed did it with technical prowess, as is clearly evident on standout tracks such as ‘Falling Apart’. Bassist/vocalist Harry Armstrong possessed a very powerful death growl too and his deep deathly roars are the perfect vehicle in which to channel the gloomy lyrics that are obsessed with death, dying and funerals. ‘Hope Finally Died’ is morosely magnificent in every way and should appeal to anyone who likes their death metal with a huge dose of dirgeful funereal doom. The only thing really missing with this reissue is the lack of bonus tracks, for example the addition of demo or EP tracks would have made this reissue even more desirable and value for money.