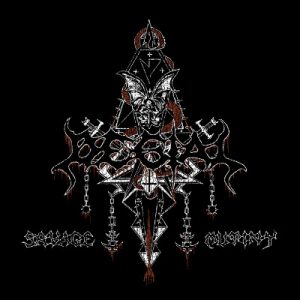 The deep communion between Uppsala’s wolfpack continues, and Degial have once again called upon their brothers on their second album: Watain’s Erik Danielsson handled the artwork (which has similarities to his own band’s ‘Sworn To The Dark’); In Solitude’s (R.I.P.) Gottfrid Åhman recorded and mixed the album while his brother Pelle contributed lyrics, and Set Teitan (Watain) offered up guest vocals and guitars here… So far so ‘Death’s Striking Wings’, right? But while their debut full-length was definitely a blacker version of ’80s Morbid Angel, ‘Savage Mutiny’ is getting further into the dark side of metal. Of course, the early-Morbid Angel touch is still very present, but just like their labelmates Vorum, with whom they have more than one common meeting point, Degial have moved away from the ‘death metal’ they used to deliver and reached the more intangible and more spiritual ‘Metal Of Death’ (a tag that has become synonymous with the myriad bands Uppsala creates). And though ‘Savage Mutiny’ lacks the immediate catchiness of its predecessor, it’s more accessible than Vorum’s ‘Current Mouth’, and an adequate soundtrack to an obscure mass burial in a stinking cemetery. A welcome evolution, creating a more personal style and that will leave a longer-lasting impression.