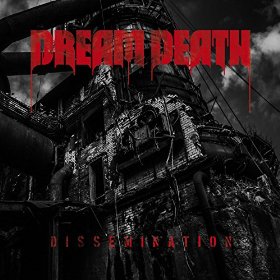 Pittsburgh doom dealers Dream Death are back with their third full-length album and their second in quick succession after reforming a few years ago.

‘Dissemination’ continues on where the previous album (2013’s ‘Somnium Excessum’) left off, full of up-tempo Frostian riffing and a mixture of mid-paced and down-tempo doom metal played in their own easily distinguishable style.

There are a lot of stellar riffs from start to finish and they have without a shadow of a doubt penned some of their strongest songs since the cult classic ‘Journey Into Mystery’ while the trademark riffs of Terry Weston are ever present and sound as hook-filled as ever.

The vocals of Brian Lawrence (also on guitar) sound as ominous, harsh and gruff as ever and it’s good to hear he hasn’t diluted his style in the slightest as his more harder-edged vocals were such an integral part of the classic Dream Death sound as well as the early material of Penance, the band which was formed after the band split up originally.

The drumming of Mike Smail is as variable, solid and powerful as always, pounding away with hard hitting heaviness and he proves once again why he is one of the best drummers in the doom genre, and Richard Freund anchors down the rhythm section with his bass bulldozing providing a weighty bottom end and perfect compliment to Smail’s hellish hammering.

Dream Death are well and truly back from the dead; THIS is how you do a reunion!