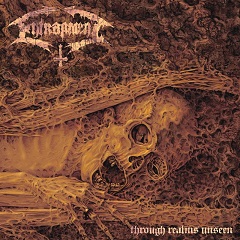 Entrapment have thrown out a bit of a death metal curveball with this their latest (and third album), but it’s a breath of fresh air in a scene once again flooded with general mediocrity, be it from countless cavernous monotone sounding third rate Incantation clones or seemingly endless HM2 pedal owning Swedeath wannabes just playing Entombed and Dismember riffs backwards without any attempt at injecting their own style or sound into their music.

Entrapment’s latest effort transcends any current death metal trends and they put their own black mark on the genre. There are definite nods to the old school and the old gods of the genre as well as their previous output but overall this new material is a significant progression and a very inspired take on death metal, taking the formula perfected by pioneers such as Asphyx and Bolt Thrower and remoulding it into their own sound.

They take the heavy bounce and groove of the aforementioned Bolt Thrower as well as mid-’90s Entombed, the up-tempo aggressive attack of Morgoth and the mid-paced bulldozing crush of Asphyx (the vocals have a Van Drunen-esque roar to them too), a dash of punked-up crusty chaos and throw it in a melting pot of other influences to create a very memorable, hook-filled heavy death metal feast for the ears.

There is a certain epic and grandiose quality to the compositions that make up ‘Through Realms Unseen’, that is only bolstered by the huge and monstrous sounding thick and heavy production, which really brings these songs to life and really grabs you by the throat, making sure they have your undivided attention.

What makes this album even more impressive is that it is the work of a sole recording member, namely Michel Jonker who handles each instrument aswell as the vocals with impressive talent and ease. A monumentally malevolent beast of an album that proves that you can create a death metal album in this day and age without it sounding stale and stagnant.