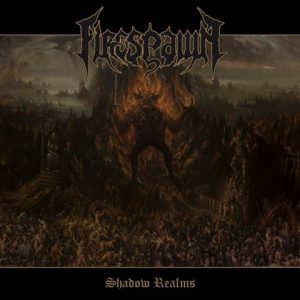 Hats off to the one who can in good faith, without any prior clue, guess that Firespawn is a Swedish band. With their ‘all-star’ line-up comprising current or ex-members of Entombed, Dark Funeral, Unleashed and Necrophobic, you could indeed bet that Firespawn will sound 100 percent Swedish.
Well, that’s not the case. While, of course, some riffs would have passed muster on a ’90s Swedeath album, with its modern production, the un-obvious riffs, and its sheer energy, ‘Shadow Realms’ sounds more like an early-’90s US brutal/technical death metal band influenced by Bolt Thrower and drowned in a much darker lake.
Trad heavy metal solos are also very present (not surprising given bassist Alex Friberg’s Iron Maiden collection), and the acoustic ‘Contemplate Death’ or the Ghost-like backings on ‘Lucifer Has Spoken’ contribute in giving Firespawn a personality of its own. Mainly full-speed ahead, and with a very guttural L.G Petrov at his best, ‘Shadow Realms’ will certainly not be the remembered as THE highlight of 2015 or the most innovative album ever, but as a solid debut from experienced musicians, who are most welcome to record a second Firespawn album anytime soon!