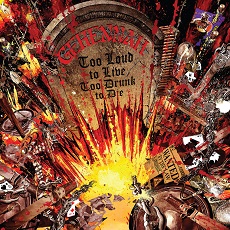 Gehennah are one of those ‘I don’t give a flying fuck’ bands. A career born from the ideals of drinking, fighting, smoking, women and heavy metal; a metal version of a biker gang, substituting the Harleys for a different kind of six-stringed beast. ‘Too Loud To Live, Too Drunk To Die’ is only the band’s fourth full album release in a career spanning 13 years but if you’re familiar with Gehennah you’re going to know what to expect; street metal anthems celebrating all we love about the genre.

However, is this a band slowing down? ‘Still The Elite’ even addresses that question with the words “It ain’t no secret we’ve seen better days” and it pretty much sets the tone for the album hereon. Three tracks in we have the album’s anthem ‘Too Loud To Live, Too Drunk To Die’ and then we quickly revert to the mid-paced thrash sound that’s ever present and it’s clear this album won’t be remembered in the same way their early releases were for shaping the street metal/black thrash cross over style we know and love.