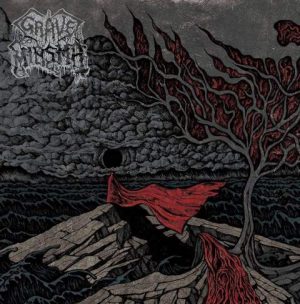 Few bands invoke mysticism and atmosphere quite like Grave Miasma. The leather clad quartet play behind a delicate haze of incense whilst doused in blood, their first full-length release, ‘Odori Sepulcrorum’, invoking deities, death, decay and the unknown, giving the listener a lesson in death metal’s rich and unrelentingly brutal history.

Three years have passed and we’re now presented with the EP, ‘Endless Pilgrimage’. Released on Sepulchral Voice, their home since 2009, it’s another step forward for the band. Opening with the track ‘Yama Transforms To The Afterlife’, their sound is unmistakeable. Grave Miasma don’t hide behind atmosphere, they embrace it and it’s heard in every single chord progression, vocal growl and mid-paced blast. The EP itself clocks in at over 30 minutes long, the perfect album length; after all ‘Reign In Blood’ is just shy of 29 minutes, and that’s the template, right?

‘Endless Pilgrimage’ also contains a re-recording of the track ‘Glorification Of The Impure’, which diehard fans will recognise from a release under the band’s previous moniker, Goat Molestör. The track, even with a fresher production, stands out on the EP with raw fury and Azagthoth drenched guitarwork.

‘Full Moon Dawn’ is a fitting close, and clocking in at close to nine minutes feels like a fitting conclusion to, from a songwriting point of view, the band’s finest work yet. Grave Miasma along with bands such as Cruciamentum and Vacivus are flying the flag for British death metal both on our shores and internationally. We have a treasure in Grave Miasma and we can only hope their next release is yet another progression in the band’s unearthly trajectory.