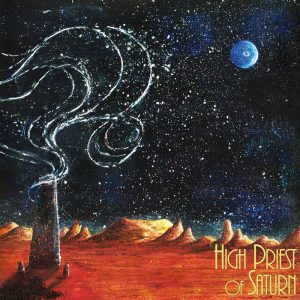 When a sub-genre tags gets bandied about as much as ‘occult’ and ‘psych’ have of late, listener responses can tend towards the suspicious. But in ‘Son Of Earth And Sky’, Norway’s High Priest Of Saturn have created a record far more concerned with establishing its own merits than tapping into the fleeting popularity of the latest music hack buzz words.

With just five songs,’Son Of Earth And Sky’ doesn’t appear to be the weightiest prospect but, then, we are in the glacial realm of OM and their ilk, where slow and steady wins the race (the race, of course, being a construct of the unenlightened mind) and Time, Space and number of tracks are trifling concerns.

Despite a preoccupation with the transcendental, High Priest Of Saturn have clearly saved some brain space for their instruments, all of which sound retro-perfect for their slowed-down Deep Purple grooves. In a comfortable and organic-sounding mix, guitars sit behind the bass whilst the the keyboards and impassive reverb vocal make known the cosmic ambivalence of the universe and transform it into something more human yet no less wondrous.

With each song offering a similar journey, something of a pattern emerges; some might regard this as the band working to a formula; to those of a more occult persuasion, this might constitute a ‘method’ aiding contemplation, either way, as a meditation on the abstract and the ethereal,’Son Of Earth And Sky’ has plenty to offer.