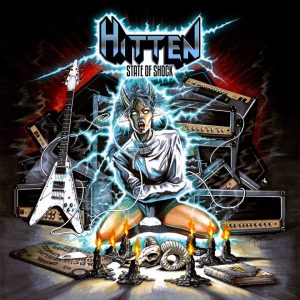 This is the second full-length album from these Spanish stallions and if their debut was literally the ‘First Strike’ (with the devil), this puts the listener in a, literal, state of shock. After countless live shows (for a young band) across many countries, the band are forged in the electric battlefield and they stand in a great position in this so called “new wave of traditional heavy metal”, along with bands like Cauldron, Ambush and Lethal Steel.

‘State Of Shock’ is faster than their debut and the musicianship and songwriting is growing. The elements and inspirations of early-Maiden, the NWOBHM and Riot are present and strong and you can even find a guest vocal appearance from Todd Michael Hall (Riot V, Burning Starr) on the song ‘Eternal Force’.

Despite it being faster than the debut, you get more melodies and memorable choruses. Hitten are working hard to show off their professional sheen. The hard and rough edges have been smoothed out and the production is more polished but the band will need something more personal and unique to get them in the Enforcer league. Songs like ‘Don’t Be Late’ and ‘Chained To Insanity’ are on the right path. Watch out!