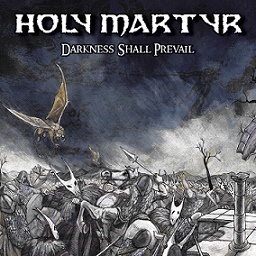 It’s been a long time since the third and last studio album from these Italian epic metal warmongers. Six years after the Samurai sagas and more years after the Greek and Roman themes, Holy Martyr deliver a concept album based on the mythos created by J.R.R. Tolkien.

While their last album ‘Invincible’ was mainly up-tempo, on ‘Darkness Shall Prevail’ the band is focused on confident and epic songwriting, creating a mid-tempo record with a lot of slow, doom elements. We cannot place them under the doom metal banner, but epic doom metal is valid for some songs here. Most likely they’ll return to pure, epic metal forms. This album won’t break the borders of underground metal and they will stay soldiers of underground, but I have to confess that they tried something different this time. Slower and doomy, some times it works, some times not, but for sure, the band sounds very confident.

The organic production and the solid rhythm section helps a lot, but while you can listen ‘Darkness Shall Prevail’ without skipping a track, there’s not a killer “stand-out” song as they had on previous albums. Pirates of the underground classic metal will check this release anyway and Holy Martyr will find the usual fans in Greece and Germany.