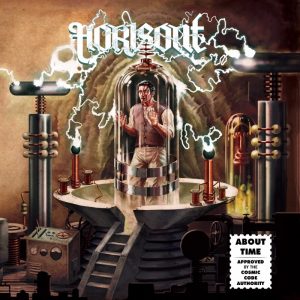 When Horisont first hit the scene, their music was fun, but seated in homage territory. With ‘About Time’, the band has maintained their retro-roots while branching into somewhat unchartered territory through a polyglot of sounds. The five-piece’s newest record runs the gamut from ’70s prog to ’80s synth-rock, with a thick dollop of fuzz on top. But what seems to make the record so unique is the fact that it feels… greasy.

Horisont’s sound is unlike a lot of the other retro rockers floating around currently due to a potent filth in their sound. While many bands seem content to be the 6pm latte or the 8pm craft beer at the sushi bar, Horisont are something darker. Almost anachronistically, the Swedish band feel like the soundtrack to a 3am kebab and a take-away pint on a 40-degrees day.

The point is, Horisont are a rawer animal than their peers. Their music is far from a carbon copy of the bands that have inspired them, but tunes like ‘Electrical’ and ‘Letare’ carry the urgency and danger of a more fragile time that is lost on many contemporary bands. ‘About Time’ is raw, unapologetic, subtle and scruffy in all the right ways.