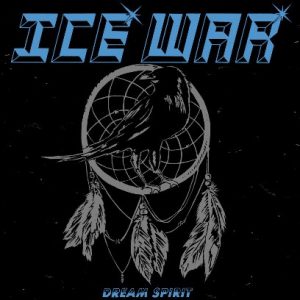 Where most bedroom metal fantasies end with posing in the mirror whilst wailing triumphantly on an imaginary flying V, heavy metal auteur Ice War has made his a reality with latest release, ‘Dream Spirit’. The work of Canadian lone wolf Joe Capitalicide, everything about this cassette screams one-man band. With no coy bandmates to hold him back, Capitalicide freely indulges his old school fetishes, untroubled by the bass player’s need for ‘originality’ or the drummer’s secret desire to be in Dream Theatre.

With tracks like ‘Warriors Of The Sea’, it’s clear that this release, far from being troubled by notions of cliché, is all about the original mythology of metal, which is rendered with horror-comic vividness across its three tracks. Though Capitalicide has clearly done his homework, the boogie-woogie of the title tracks and the obvious joy taken in shouting ‘GEE-TAR!’ before the guitar solo in the obligatory Running Wild cover prevents Dream Spirit from being an over-reverential affair, Capitalicide choosing to stand shoulder to shoulder with the heavy metal greats, rather than worship at their feet.

Conjuring images of spikes, chains, leather, Rob Halford on a motorbike, Rudy Schenker’s moustache, Glenn Danzig’s leather gloves, ‘Dream Spirit’s success is in bringing the essence of heavy metal to within sniffing distance. Obviously it’s not as good as shredding on your imaginary flying V – but it’s damn close.