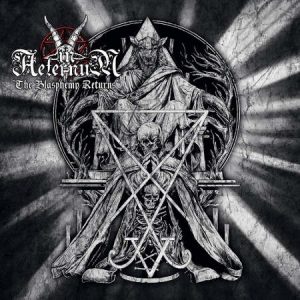 It’s been almost 10 years since In Aeternum released new material, and it’s good to see the biking metal punk David Larsson back with a vengeance! ‘The Blasphemy Returns’ is only a four-track mini-album, with a live and unpolished production, but it captures the energy of the band.

In Aeternum have never been the most creative band, but they delivered back in the day and were sadly underrated. The opener ‘Wolfpack’ is a decent if not extraordinary track, saved by the dynamic ‘Stench Of Victory’, maybe one of their best tracks ever.

The other half of the EP consists of a new version of ‘Majesty Of Fire’ (the opening track of their 1999 debut ‘Forever Blasphemy’) and a mighty cover of War’s ‘I Am Elite’. David was not in the War line-up recording that track, he joined just after, but almost 20 years after its release, the ‘Total War’ EP is still a massively killer release. Nothing groundbreaking here, but it’s good to see the band back in good shape, and hopefully this gets followed by a full-length.