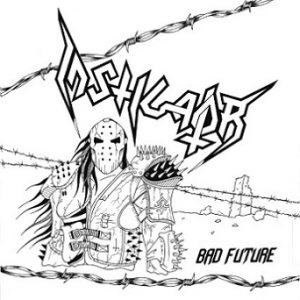 From the crudely drawn cover art to the spiky logo this band just screams ’80s heavy metal at you! Musically these Swedes are firmly rooted in the heavy/speed side of things, with plenty of up-tempo energetic riffing and galloping drums and bass throughout the four songs on this 7″ release.

At times they come across like a less polished Witchgrave although lyrically they deal more with futuristic and sci-fi themes a la Voivod than sacrificing virgins on altars at black masses (but they do cross over to the dark side lyrically in ‘Black Magic’). The guitar tone, riffage and overall vibe of the music has strong similarities to their fellow Swedish speed heavy metal maniacs.

The vocals are varied and shift from blackened rasping and possessed screaming to demented higher pitched shrieking, which at times reminds of King Diamond. Production-wise the whole affair is stripped down, old school and lo fi, sounding like it was recorded in some cobweb covered basement studio back in the early to mid 1980s.

It’s no surprise to find out that this band consists of ex members of Portrait, Autopsy Torment, Devil Lee Rot etc.. and a current member of Assassin’s Blade. This should appeal to fans who like old school, no frills straight ahead heavy/speed.