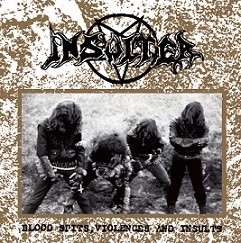 Hailing from Belo Horizonte, Insulter shared members with Sarcofago and Sextrash in their early years and recorded two demos over the course of 1986-7 in a similar musical and philosophical spirit (i.e. violently chaotic sound, OTT lyrics), recorded two demos, ‘The Insulter’ and ‘The Last Illusion’. The former’s rough sound captured the ‘fuck-it-all’ essence of the style emanating from Brazil in the mid-’80s, although the latter’s improved production perhaps gave more bite to the frenzied and recklessly disordered path that Insulter were following. Perhaps with an eye on Sepultura’s elevation to the world stage by 1989, Insulter, following a number of line-up changes, released their third demo, ‘Ignoring The Falsity’ that year. Gone was the disturbing blackness and in its place was a far more considered, professional and traditional take on thrash. Collecting the three demos with sundry rehearsal tracks that bridge the two eras of Insulter, ‘Blood Spits’ is another of NWN!’s killer and must-have demo exhumation exercises.