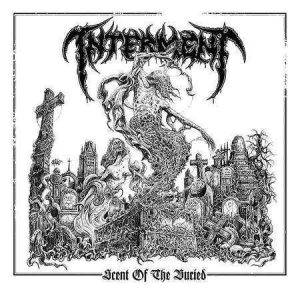 Swedish death metal veterans Interment have returned with their second full-length album full of buzzsaw HM 2 pedal driven riffing and an overall vibe that evokes the heyday of the Swedish death metal scene circa 1989-1993, which is when this Avesta-based band first hit the underground demo scene. Take a huge dose of early Entombed, a generous pinch of classic Dismember and a big pinch of prime-era Grave put it into a musical blender and the result is what you hear on ‘Scent Of The Buried.

This is grimy, gritty, raw death metal in it’s most purest and unapologetically old school form. This is all killer and no filler but some initial standout songs like ‘Chalice Of Death’, ‘Death And Decay’, ‘Nailed To The Grave’, ‘Sinister Incantation’ and ‘Scent Of The Buried’ really do sound like they could have been a lost bonus track on ‘Left Hand Path’ or ‘Like An Everflowing Stream’.

The bellowing, commanding growls of Johan Jansson also bring to mind Dismember vocalist Matti Kärki in quite a few places throughout. In fact the resemblance is so uncanny you’d be forgiven for thinking the former Dismember frontman had dusted off his larynx and contributed some guest vocals!

The old school Swedish death metal connection on this album dosn’t stop there, this slab of svensk dödsmetall was also produced by legendary producer Tomas Skogsberg who makes this sonic savagery sound as sharp as the blade of a scythe.

Interment are not reinventing the musical wheel here but they do drag it through the graveyard a few times and leave a very dirty black mark. Powerfully Potent.