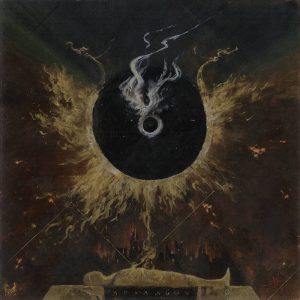 Causing a real stir in certain dank corners of the underground, Sweden’s Irkallian Oracle definitely tick all the right boxes at first glance. Plying their trade in the realm of this so-called ‘Abyssal’ (i.e. reverb-soaked) death metal style that is so totally on-trend now, we have the by-now expected hoods, occult lyrics/imagery and a genuine attempt at maintaining some sense of mystery (‘…there is and has never been a common, stable lineup. Any member offers multiple contributions at different times’) – all acting to lace their material with as much seething dark authenticity as possible.

And while it certainly hits the spot on some levels with a suitably organic, cavernous sound, further digging reveals that Irkallian Oracle’s cult house has foundations of sand for the most part. In many cases, the riffs simply are not there and whilst the drums thunder pleasingly and powerfully, the slithering single-string riffs feel a touch throwaway in comparison. Whilst they saw away in a suitably grinding fashion, there’s simply not enough happening compositionally or dynamically to truly elevate this beyond the ‘solid’.

Things tie together more effectively on ‘Elemental Crucifixion’ with a propulsive synergy between drums and guitars boasting a hypnotic and surging vitality – more of this and we could have been onto something of a winner. By and large however, although ‘Apollyon’ initially appears to be one of the coolest records in the underground so far this year, it’s rather under-baked for the most part.