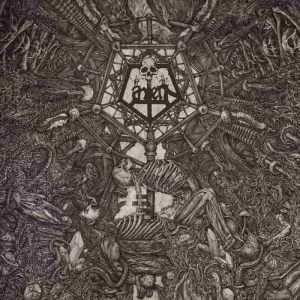 Shining stars of the current Finnish death metal scene Lantern return with their second full-length ‘II: Morphosis’, released once again through the equally as effulgent Dark Descent label. Their debut opus caused a stir upon its release in 2013 and four years on you’ll be glad to know that the formula they sketched out with that release is expanded upon in these nine tracks.

Straight away one can hear that the album benefits from a glossier production than its predecessor, however it refrains from verging on plastic with its roots still in the grimier side of things. It is larger and more polished, with the drums benefiting most of all but some of the leads and solos sound almost like raw studio takes which adds to the (slightly thinner) layer of filth this time around. The twin forces behind Lantern’s studio output, namely Cruciatus and Necrophilos, again meld the refined chaos of ‘Blessed Are The Sick’-era Morbid Angel riffs with technical proficiencies and flourishes akin to that which Chuck Schuldiner could conjure; as well as knowing how to plant a direct blow a la the early Swedeath pioneers, with riffs audibly heavy with proverbial slime.

Lantern prove why Finland is considered such a hotbed for death metal, and even though the comparisons to such – for want of a better expression – obvious bands are evident, they are never fully within reach, residing instead in the periphery of things. This second album shows an individuality that will no doubt come to the fore with each new release and we can look forward to seeing what avenues the band turn down next time.