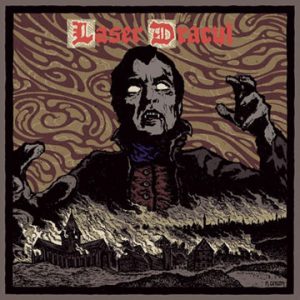 Despite claiming Black Sabbath to be their main influence, it’s difficult to see any evidence of this within Laser Dracul’s sound when the Swedish trio’s debut EP first erupts forth from the speakers. You’d be forgiven for thinking you’ve put on an Uncle Acid record by accident. Opening track ‘Black Moss’ is a play for play riff of ‘I’ll Cut You Down’ accompanied by some horrifically mismatched industrial style vocals.

Despite its bumpy start, Laser Dracul really do blossom into their own sound for the remaining three songs; ‘Dying At Sunrise’ pulls the tempo right back into a groovier, swampier sounding chug, with the vocals moving to a lower register, giving the entire song a heavier, much more sinister feel. That filthy down-tuned twang remains throughout, mixing with some subtle metallic undertones to make for a record that could be the perfect B-movie horror soundtrack.

While this sound certainly keeps your attention over the course of four tracks, it’s difficult to see how this would work on a full-length album and it will be interesting to see how they build upon their song-writing for their next release. Not an essential opus by any means, but a genuinely sleazy listen.