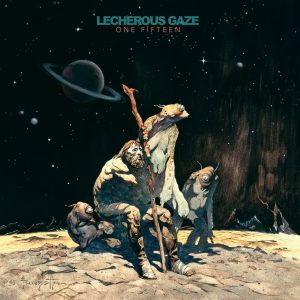 Melding punk and classic rock, Lecherous Gaze come across like a distillation of Detroit’s musical output, with the righteous swagger of the Stooges and MC5 butting shaven heads with the primal punk of Negative Approach. Familiar yet fresh, their version of punk borrows from rock’s source code, pinching riffs from clean-cut surf and the relatively wholesome early rock and roll and infusing them with a manic energy unavailable and perhaps illegal during youth culture’s infancy.

With upbeat major chord riffing and well-used rock motifs, it’s easy to imagine the opening trio of ‘Reptile Minds’ and ‘Cosmos Redshift’ providing the soundtrack to that defining set piece of Americana, the high school prom; that is until the unhinged bellowing of Zarvan Zaidi pours a bucket of blood on the whole thing and the album’s sneaking weirdness fully reveals itself. Its cover blown, the record revels in infamy with reefer-mad minor chord riffing and Communist-sympathising synths adapting classic rock ‘n’ roll to a rock consciousness traumatised by punk, heavy metal and GG Allin defecating live onstage.

If ‘classic’ rock has any meaning in such an age, Lecherous Gaze have found it with ‘One Fifteen’.