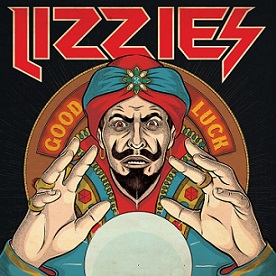 Obviously, on paper, Lizzies, a four-piece ‘Maiden-infused metal band’ from Madrid sounds like our cup of green tea. Having flogged around the London toilet circle circa 2006 in girl bands myself, it’s easy to recognise that sort of passionate enthusiastic raw-edged heart that often drives bands like Lizzies. Named after a girl gang from The Warriors (look it up), and given that today is the day that America are voting for an orange buffoon to run itself aground on a sandbank of xenophobic bigotry (which on the flip side, means a good few years for punk rock records), we want this band to serve up some proper badass rebel yells.

So, do they deliver? Vocally, Elena has a few tricks up her sleeve, finishing a phrase-off with a little punk rock growlage here and there and giving some good, clear range in places (‘Mirror Maze’, ‘Night In Tokyo’ and ‘Phoenix’), however it all feels a samey and tokenistic. Which leads to the next point – spunky, balls to the floor metal this ain’t. It’s sort of more melodic rock with a relatively driving guitar (‘Russian Roulette’).

‘Speed On The Road’ is probably one of the more accomplished songs on the album showing a glimpse of the band’s potential – although bizarrely Tiger Army’s album ‘Power Of Moonlite’ will just not stop popping up in my mind. However it has more pace, fury and energy than the rest of the record. Overall, ‘Good Luck’ is a little one-paced and just doesn’t have that fire, sweat and blood that we were so looking forward to.

Women can (and do!) wield great power in bands and Lizzies would do well to work on developing a heavier, more passionate, more meaningful sound. Let’s hope this comes with more gigging and songwriting experience and they don’t just blow away in the thistledown of another semi-exuberant, half-hearted girl-rock band.