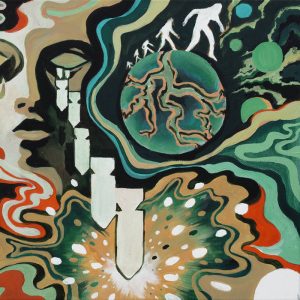 There must be something in those Swedish waters that grants any band emerging from them the unrivalled power to excel at late ’60s/’70s inspired rock. The talented ladies forming Fårösund’s MaidaVale are no exception – they are by all means masters of their craft. On ‘Tales Of The Wicked West’ listeners are treated to nine songs of psychedelic rock ‘n’ roll, infused with the vigour of youth and a desire to incite change. The production suits the music perfectly – capturing elements of that ’70s sound bands are eager to recreate, without sounding dated: drums are spacious and full, vocals are assured and melodic, the bass is throbbing and the lead guitar’s searing.

What is interesting about MaidaVale is that, though both their influence and style are clearly rooted in the ’70s, the band’s character exists outside of that treasured timewarp. Occasionally it dances into an early ’90s groove à la Blind Melon on ‘Standby Swing’, while ‘Dirty War’ and ‘Find What You Love And Let It Kill You’ feature basslines and chord progressions reminiscent of Mother Love Bone – both bands heavily influenced by aspects of ’70s rock who succeeded at not sounding like duplicates of their idols. The music is passionate yet playful and doesn’t slip into the muddied waters of overdone nostalgia.

Perhaps the only thing that lets the record down is the lyrical content. The handling of lyrics in ‘Colour Blind’, for example, starts to sound like the kind of advice/preaching found in a hardcore band and it seems a little out of place with the music itself.

The album’s closing track ‘Heaven & Hell’ is dangerously similar to Funkadelic’s ‘Maggot Brain’, too close to be considered an homage, as it sounds like a direct cover, but that being said, it’s still great listening. ‘Tales Of The Wicked West’ is a strong debut album showing great potential for MaidaVale. May they continue on to fulfil it.