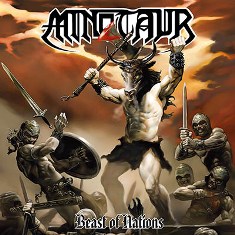 Minotaur isn’t the most productive German band: founded in 1983, after a first album in 1988 (‘Power Of Darkness’, a ‘cult’ album whose original copies are now worth a pile of $$$), it took them more than 20 years to come back in 2009 with the so-so ‘God May Show You Mercy… We Will Not’, and another seven years for this EP.

‘Beast Of Nations’ contains four tracks, lasts a quarter of an hour, and sadly sticks to the average end of the scale. After an impressive yet messy intro that sounds like how Slayer ended their concerts in 1985, we’re getting into a purely German thrash/hard rock attack here. Think Kreator in their early days, with that raw aggression, but sadly not in their most inspired days. Add some Accept to it, and that should give you a good idea of where ‘Beast Of Nations’ stands. And these are valid comparisons for both music and vocals, as Andi’s voice takes from both Mille and Udo’s energetic but not always ‘in tune’ style.

But while the fast riffs do the trick, the slower chords sometimes feel out of place, and the drums are too soft. It’s definitely cool to still see the old bands there and writing new stuff, but in the case of this EP, the coolest thing is to get the confirmation that Phil Lawvere, who did Kreator/Celtic Frost covers (among others) 30 years ago, is also back in the metal business for good after having done the artwork for the latest Exmortus and Nocturnal albums. Minotaur have lasted as long as Jesus, which is a good thing, but it’s doubtful that this EP (limited to 500 copies + 500 MCD) will leave a mark…