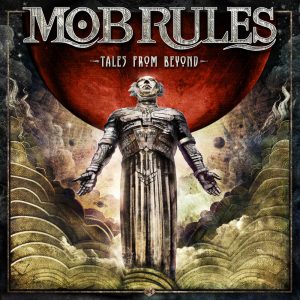 Mob Rules are an absolute textbook SPV band – solid, long-lived (they’ve been around for over 20 years now), big in Germany, they’re the last-word in sturdy, dependable metal. ‘Tales From Beyond’ – despite sounding like a Blind Guardian album-title mash-up – maintains profile there and represents another dose of annealed, fist-raising tungsten anthems.

There are so many reference points to other bands on this record, it’s ridiculous. Opener ‘Dykemaster’s Tale’ could have been lifted from any of the post-reformation Iron Maiden albums, ‘Dust Of Vengeance’ simply screams Andi Deris-era Helloween and the Eastern-tined keyboard wizardry of ‘The Healer’ even has more than a nod to Rainbow’s ‘Stargazer’. If it sounds like Mob Rules are something of a chameleonic outfit here then it’s not entirely true – it’s simply that they have enough panache to dip a toe or two into the sonic wellsprings of their peers and deliver with aplomb.

It’s lungsman Klaus Dirks that takes the crown on this front, his impassioned pipes swooping effortlessly between Bruce Dickinson and aforementioned Deris whilst still bringing a distinctiveness of his own to proceedings. If most of ‘Tales From Beyond’ is decent-to-great, the band save the best until last with the closing trilogy of the title track. This time, Mob Rules have a stab at some ‘Operation Mindcrime’-era Queensryche-styed epic metal and it has to be said, really do an excellent job of it. Soaring, swooping and anthemic, it’s a three-parter that leaves the album on a real high.