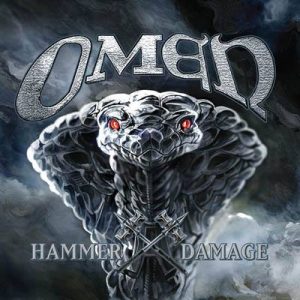 Omen’s 1984 debut ‘Battle Cry’ is a true cult classic for a number of reasons – absurd fantasy lyrics, bracing metal anthems and of course that legendarily shit album cover of pencil-drawn muscly skeleton warriors. That artwork alone pretty much places Omen in the pantheon of classic metal heroes and an affectionate place in the hearts of all ‘Keep It True’ devotees worldwide.

That is until such devotees clap ears on ‘Hammer Damage’ however – in which case, over three decades of good will could end up evaporating like ice on a fire. The production here is a total joke – the drum machine would have sounded dated in the early ’80s, the guitars frequently disappear out of the mix and Kevin Goocher’s ludicrous vocals are shockingly loud, often distorting as if they are being bellowed through a London Underground tannoy system.

The material has the odd moment – in another place and time ‘Hellas’ could have been a stirring hymn – but the whole thing is utterly torpedoed by the laughable recording quality and Goocher’s demented, barely-musical ravings. Sadly, the only damage here must be to the brains of the members of Omen if they believe this album should ever have seen the light of day.