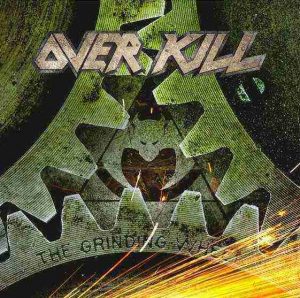 As the title suggests, on their 18th studio album ‘The Grinding Wheel’, the Overkill machine grinds on, with these veterans of the East Coast thrash scene keen to demonstrate their ongoing relevance. And whilst it’s hard not to enjoy Bobby Blitz’s instantly recognisable and gloriously over-the-top vocals, the chunky riffing and overall high musical standard, the wheel grinds for 60 minutes and at 11 songs it’s a rather unnecessarily long and unremarkable album that leaves one pining for the youthful sonic-power and authenticity of the band’s classic ’80s albums.

On this album the band adopt a variety of styles; there is a bit of crust punk vibe on ‘Let’s All Go To Hades’, some unashamed old-school heavy metal on ‘The Long Road’ (which starts with a crafty lead part), a detour into groove metal on the only short song, ‘Come Heavy’ and pure classic thrash in ‘The Wheel’.

Here, for the first time, the band employs Andy Sneap, a producer synonymous with the high-tech sound of Arch Enemy, recent Accept and Testament records, and whilst Bobby Blizt commented on their website that they tried to capture on the polished but heavy sound of their 1990 releases, Sneap gives ‘The Grinding Wheel’ his usual modern sound, which will leave old-school thrashers yearning for the raw sound of the bands early work.

Though the album is nowhere near ‘Taking Over’ or ‘Under The Influence’, in terms of originality and vitality, ‘The Grinding Wheel’ is an improvement on some of the band’s lamentable groove metal albums of the ’90s, and also, thanks to its diversity of styles, a level-up from their last few albums.