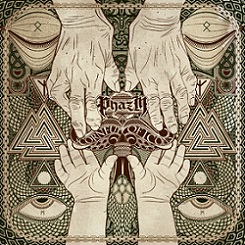 With all the symbolic elements present on the artwork, it’s very easy to believe that ‘Scornful Of Icons’ is yet another Swedish orthodox BM, or at least a Viking-inspired band. It’s thus surprising to realise that Valnoir’s work decorates the new album of this French band, whose latest opus released eight years ago (like its predecessors) was in the ‘death and roll’ scheme of things. Energetic but positive-minded, almost party-like for, say, a Silencer fan.

Time flies, moods evolve, and while some of Phazm’s personal gimmicks can still be identified, the band have been through a lot since 2008. A split, huge line-up changes, and most certainly mourning with their leader/composer Pierrick, whose dad passed away recently. So how did the insect metamorphosise? Well, it didn’t morph into a beautiful and happy creature! ‘Scornful Of Icons’ is a dark album, hyper-tight on technical points (drums, bass, guitars, those guys can play!), still catchy and well-constructed, but most of all epic and Scandinavian sounding.

Despite a pretty clear (homemade) sound that Norway’s true BM vetaerans wouldn’t have dared to use 20 years ago, there’s a strong Bergen/Trondheim scent here. And indeed Viking-touches there are, with traditional Swedish instruments used, along with the sounds of crows, wolves (‘Howling For You’), and the title-track – with its female vocals – would be perfect on an episode of that now-famous TV-show. A surprising but successful evolution for Phazm!