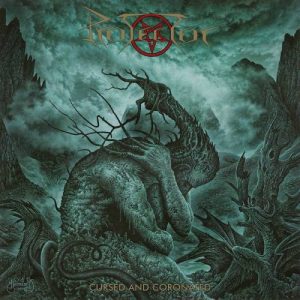 Round 2: fight! With ‘Reanimated Homonculus’, and a completely revamped Swedish line-up, German thrash veterans Protector have made a very honourable come-back. ‘Cursed And Coronated’ doesn’t pretend to reinvent the wheel and Protector re-started their aggressive thrash metal machine exactly where they had left it at the last notes of the efficient ‘Calle Brutal’ in 2013. Same line-up, same studio (Sunlight, of course), Necrolord (Dissection/Emperor et al) in charge of the artwork, and the same carnivorous recipe: old-school thrash riffs, a raw attitude making Kreator sound like a bunch of posh school boys, a bit of back-street brutality, and there you go. It’s also interesting to note that Martin Missy’s lyrics are pretty varied, covering society issues (‘Xenophobia’), religion, drugs/booze (‘The Old Boil’), the war in Finland (with some Finnish language even on ‘Crosses In Carelia’), and his love for thrash metal on ‘To Serve And Protect’, whose message (summarised hereunder) actually sums up Protector’s vision.

Thrash – Thrash Metal
We serve the Metal – We protect the Thrash
Let’s kick some ass
Thrash Metal will never die!

If you enjoyed ‘Reanimated Homonculus’ and aren’t looking for anything more than a dose of thrash metal to listen to when having a cheap beer while dirtying your sneakers on a venue’s sticky floor, then you can go for this without hesitation!